This post contains affiliate links. We may earn compensation when you click on the links at no additional cost to you.

Looking for a fun way to get to England from France? Take the ferry from Calais to Dover! Here is what you need to know to plan your own crossing. How to book your tickets, when to travel, and what to do onboard the ship.

When it was time to end our tour of Europe and head back to the US, we again took a Disney Cruise home.

We did this because Disney Cruises are awesome and a great way to relax and rest after a long trip, but also because flights can be a decent amount of money to fly from Europe back to California, and then add in the cost for a premium cabin and you can get a Disney Cruise from Europe to New York for not too much more.

Plus this also gives us some time to spend in NYC before flying the rest of the way home to California.

Our Disney Trans-Atlantic cruise departing from Dover, England was very much the same as it was the year before, in that it was everything we were hoping it would be. It was fun, good food, and super relaxing. The only differences between the two cruises were that we missed all of our Canadian ports to stay far away from a hurricane. Also, we were coming from Brussels instead of London this time, so the logistics of catching the ship were different.

Please note- we are currently not traveling. We are staying safe at home to not only protect ourselves but also our community. We are firm believers that we need to be part of the solution and not add to the problem when it comes to the virus and its spread, so we are waiting it out… hopefully, travel will be back in a big way soon.

Even though we are not encouraging travel right now we know that there are many, like us, who are eager to get back on the road and are using this time to plan some epic vacations. With this said, we have decided to start sharing travel posts to help those like us planning trips for the future.

When we were planning our time in Europe, we wanted to see everything!

Which of course, just isn’t possible, but we sure tried. We flew from Los Angeles to Calgary, Canada. Stayed the night there and then onto Paris, France. From Paris, we flew to Munich and after our time there, we hired a driver to take us to Budapest. After Budapest, we were driven to Vienna and then onto Prague followed by Berlin. At the tail end of our trip, we flew from Berlin to Brussels, had a driver take us from Brusells to Calais, and finally took the ferry from Calais in France to Dover in England.

From start to finish, we were gone for over 6 weeks!

Booking tickets for the ferry to cross the English Channel.

Once we decided we were going to get to Dover by taking the ferry, we started looking at options and saw that there were over 21 sailings to chose from that day alone. There are two different companies that sail that route.

We went with P&O. Buying the actual tickets got a bit complicated because at the time, we were in Canada and I was booking ferry tickets for France to England with an American address and credit card.

Really though, I’ve done stranger-looking bookings but this one took calls with banks and credit card companies to get it to go through, but eventually, it did. This might have been avoided by using a VPN.

When we arrived at the port on the day of our crossing, our driver was very confused about where to take us and inadvertently joined the line to drive onto the ship. With my basic french, I was able to figure out the correct place we needed to be dropped off (it was the terminal building- even though the initial people we spoke to said it wasn’t) and we were also able to board an earlier crossing by asking at the counter. Be sure to check their schedule and the time cutoffs for when you must arrive as they strictly follow it due to the time it takes to go through the boarding process.

The initial confusion aside, the boarding process went very smoothly. We had someone with us moving us along each step and onto the ship.

Deciding what tickets to purchase.

Back when we bought our tickets, we also chose to upgrade to the Premier tickets for lounge access and WIFI. The journey is about an hour and a half, and I imagined a pretty packed ship, so upgrading to have lounge access, and a nicer place to hang out seemed like a wise decision. Once on board, we ended up being one of only a handful of people in the lounge, so I’m not sure it was absolutely necessary, but I would not hesitate to do it again.

The majority of those on the ship seemed to be truckers who had their own dining hall and amenities. We crossed on a Saturday, so I imagined more leisure travelers would be on board, but it was also September so it was the off-season for that. 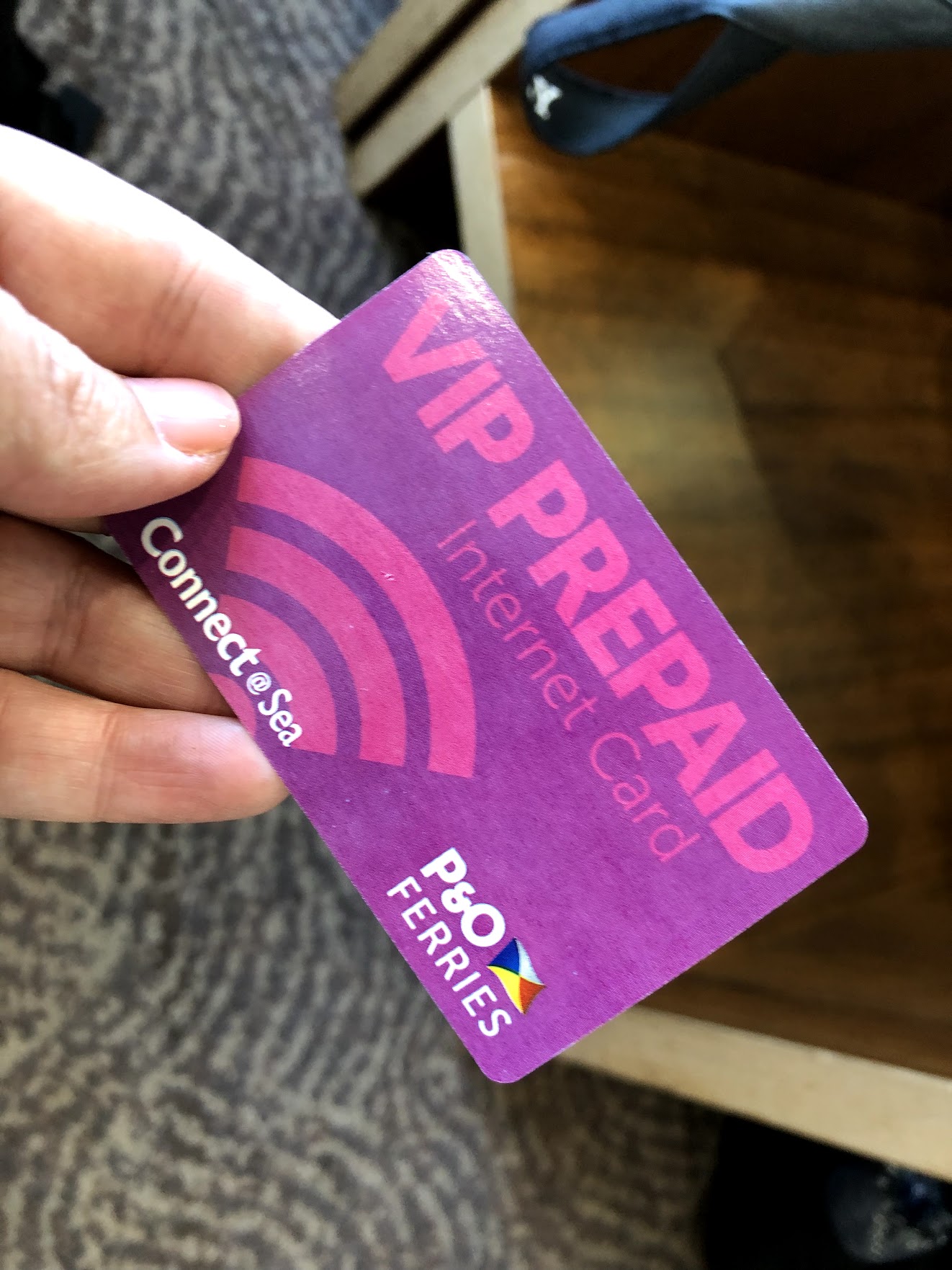 Inside the lounge, we were welcomed by a pretty nice space to stretch out.

It was for sure an upgraded sitting area compared to the common areas and there was also a lounge attendant available for drink and food orders. 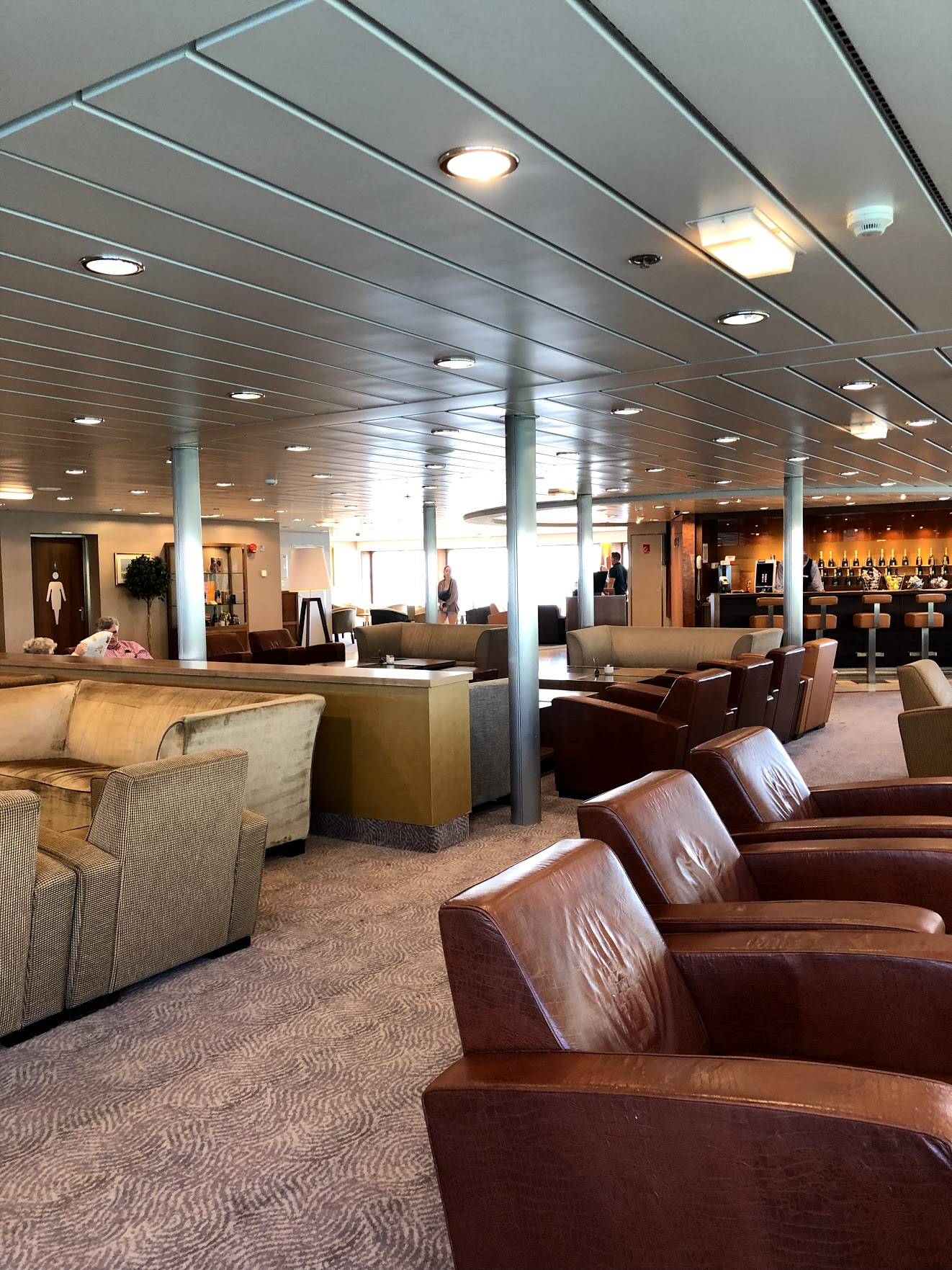 The attendant was very attentive with their greeting and delivery of menus.

There were multiple options on the menu, including a vegan choice. There were also places in the main part of the ship to go buy drinks, food, and other necessities. We spent the whole time in the lounge and only saw those on our way on and off the ship. 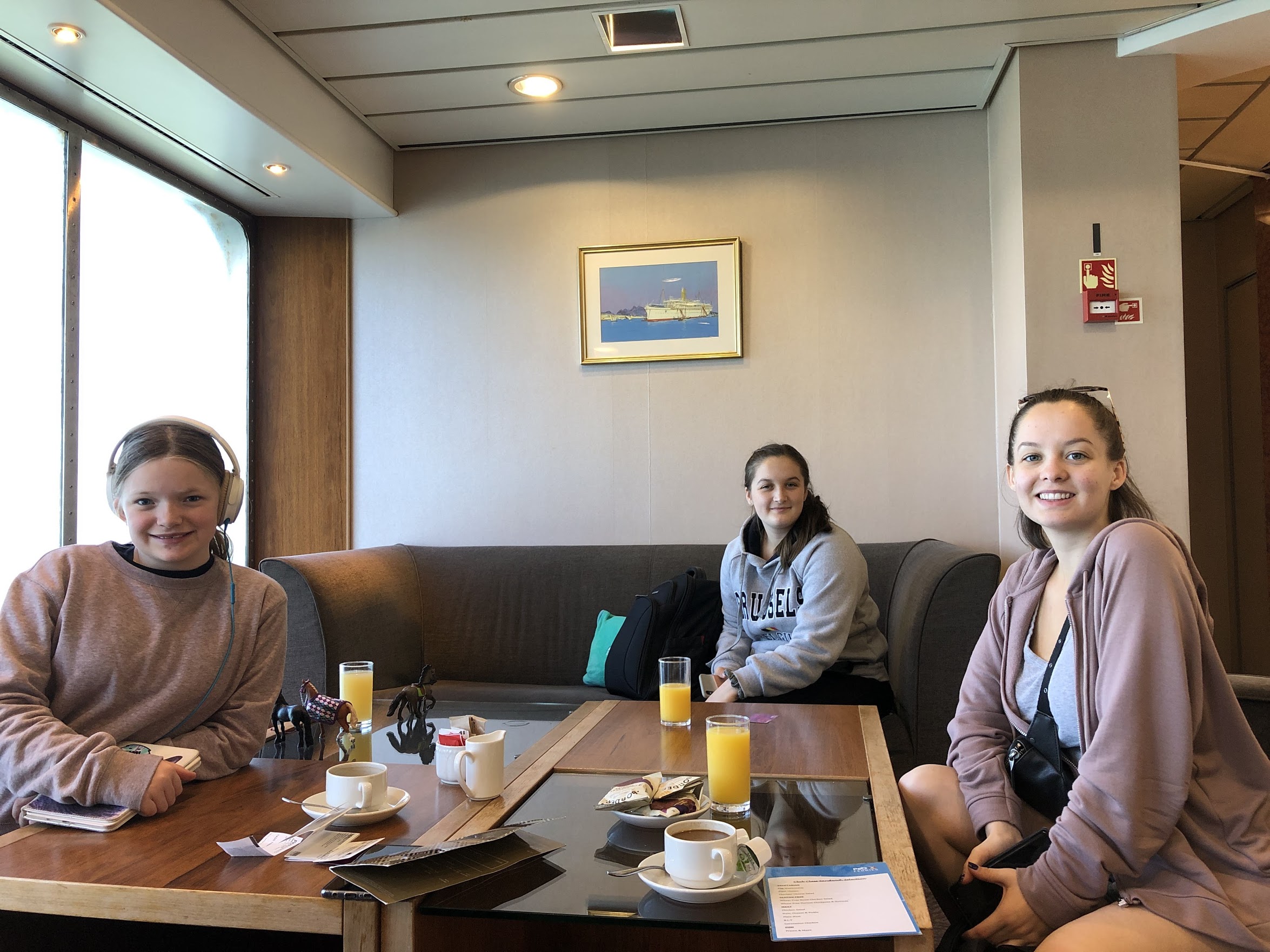 We took over a side area that had a couch and chairs and huge windows to look out over. 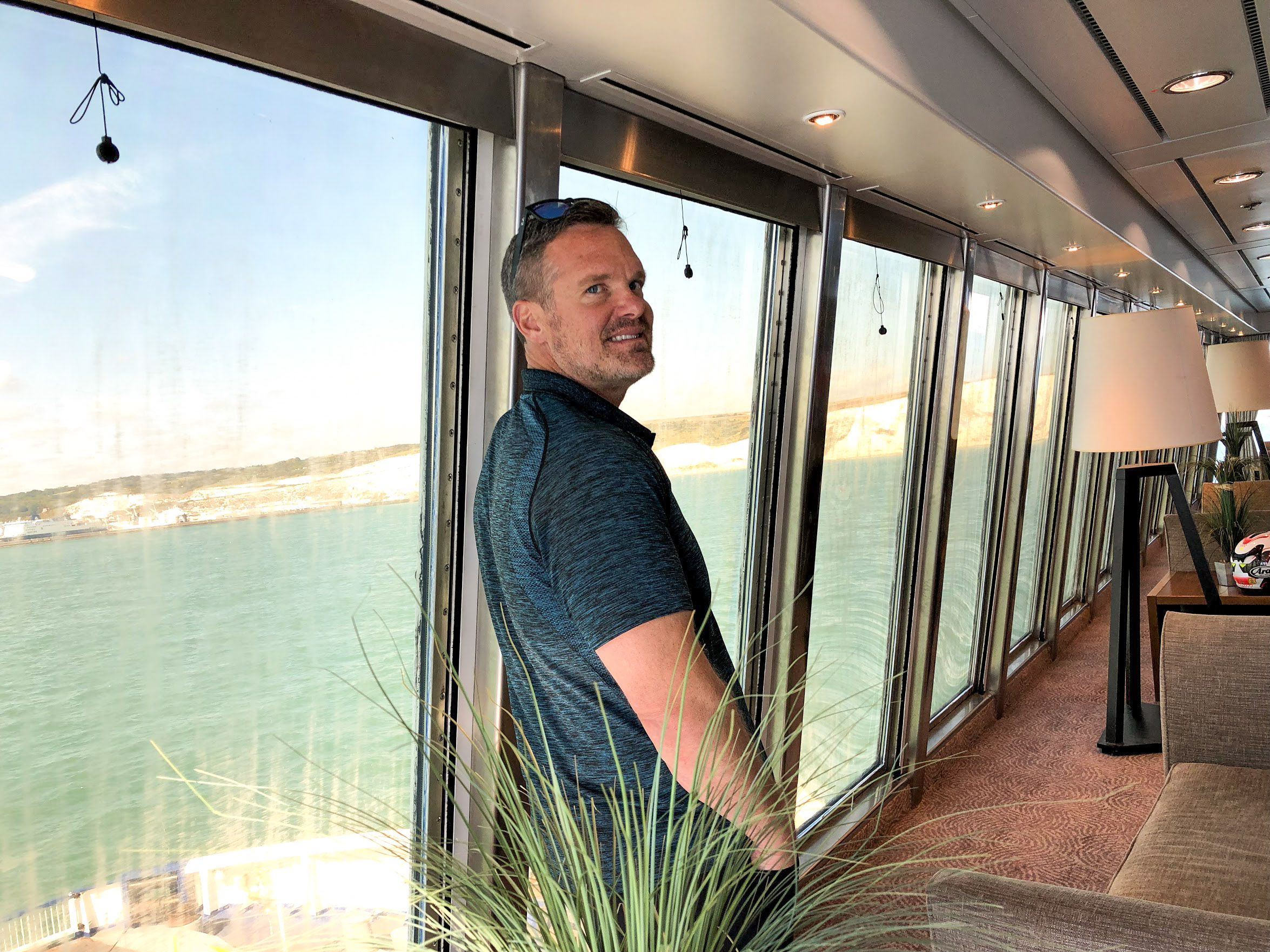 If we had known that it would be as empty as it was, we most likely would have opted for a spot at the front of the ship instead- as the viewing would have been even better, but as it was, the spot we had was great! 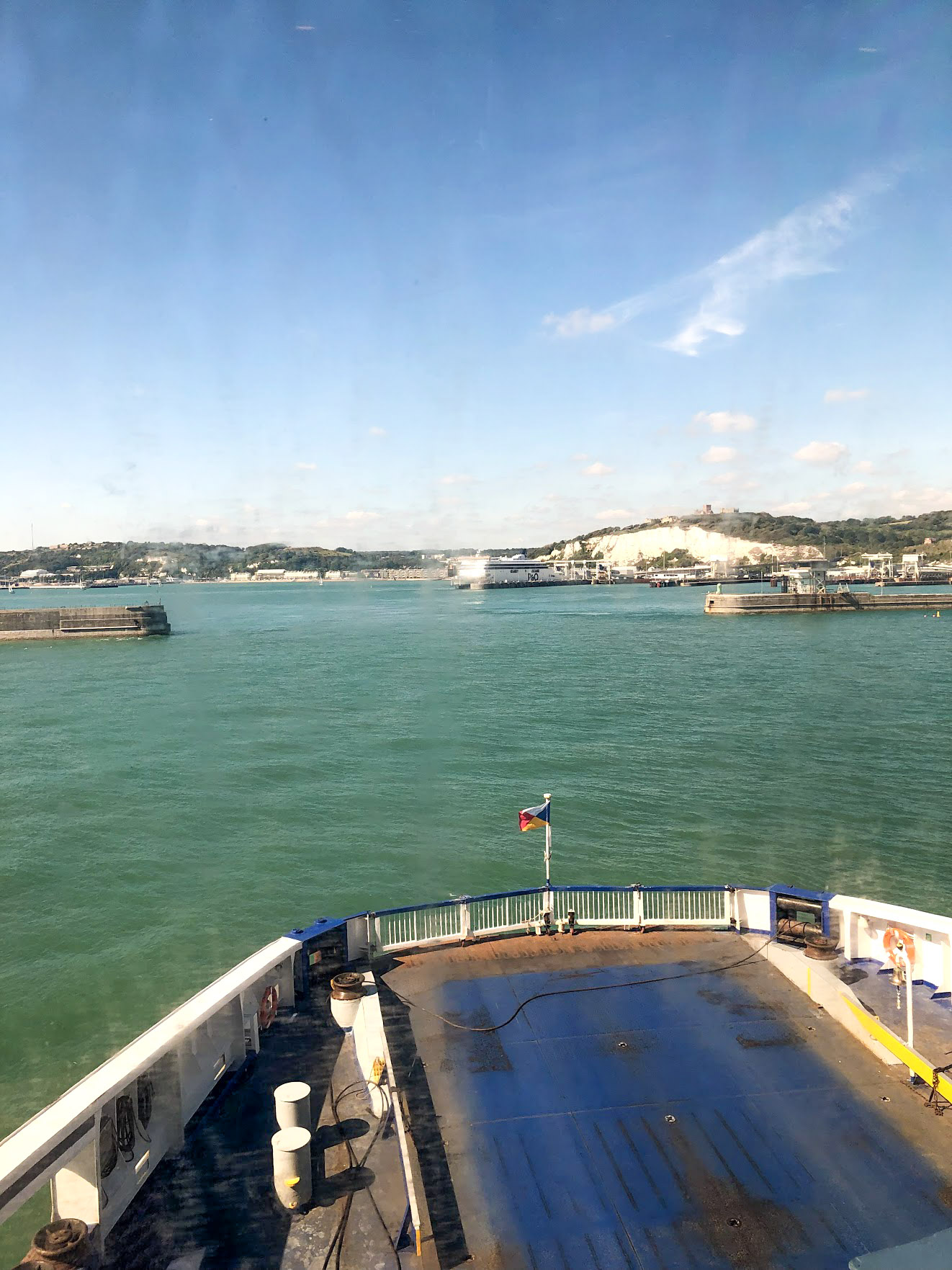 We walked around a bit to see the English Channel from different vantage spots in the lounge. 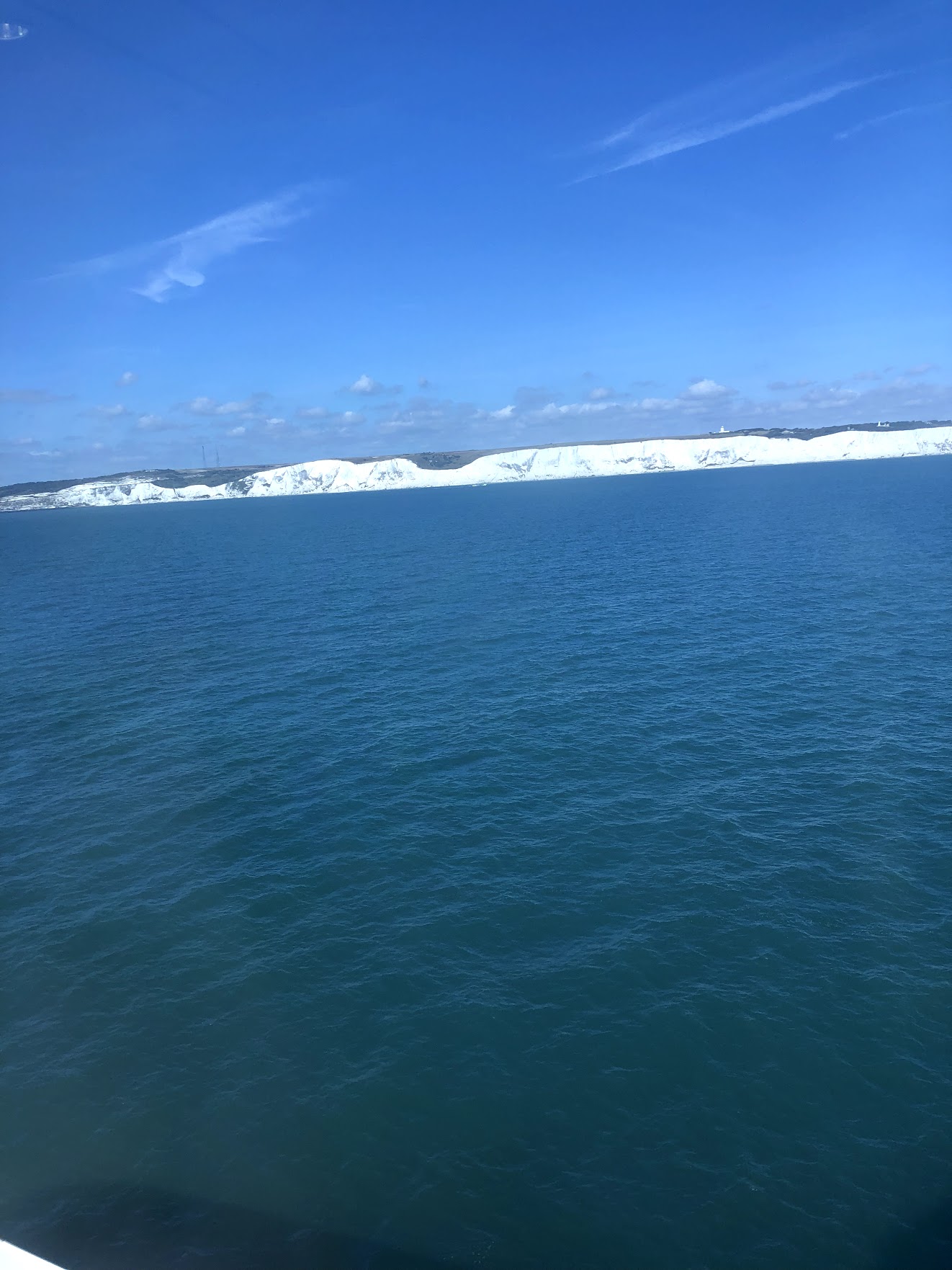 A highlight was seeing the White Cliffs of Dover!

I’ve had the pleasure of seeing these a few times before, but they are still pretty exciting to spot and I love seeing them ahead as you cross the channel and approach Dover. 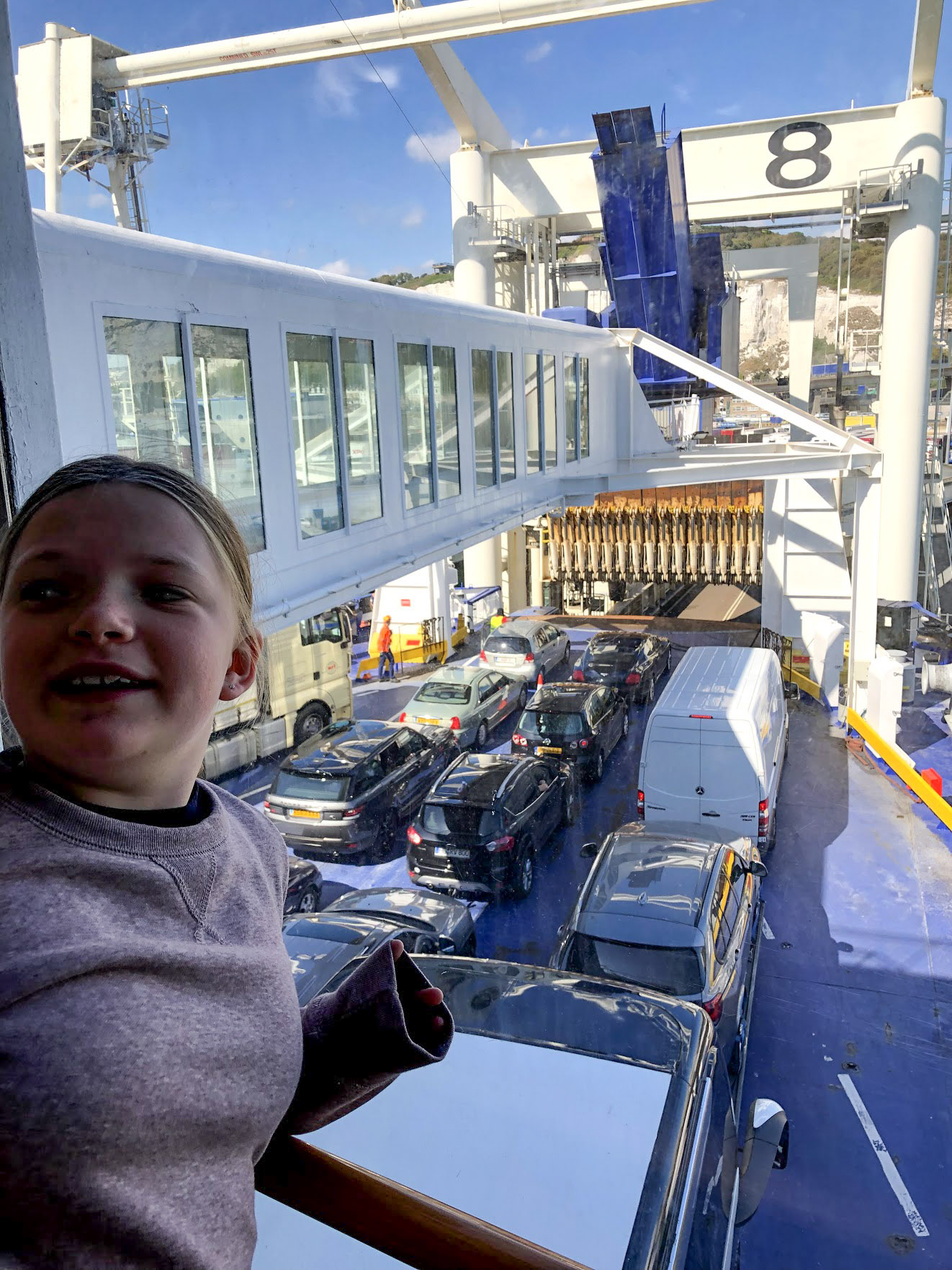 Just like getting on this ship, getting off is just as orderly.

They round up those in the lounge as you get close and walk you all the way off the ship where you collect your luggage. We kept some hand luggage with us, as we would if we were flying, so our carry-on bags, backpacks, and purses were with us the whole time, but we checked our larger suitcases.

We did consider our other option to get to Dover before we booked the ferry.

It would have involved having to fly from Brussels to London and then drive down from London to Dover. We made that drive the year before and it went smoothly, but the idea of ​​flying over to England from Brussels just to have to drive down to Dover seemed like a waste of a good day. Plus, taking the ferry over actually sounded fun and was a lot more straightforward and way less money. I’m so glad we decided to take the ferry from Calais to Dover and we look forward to taking this ferry again! 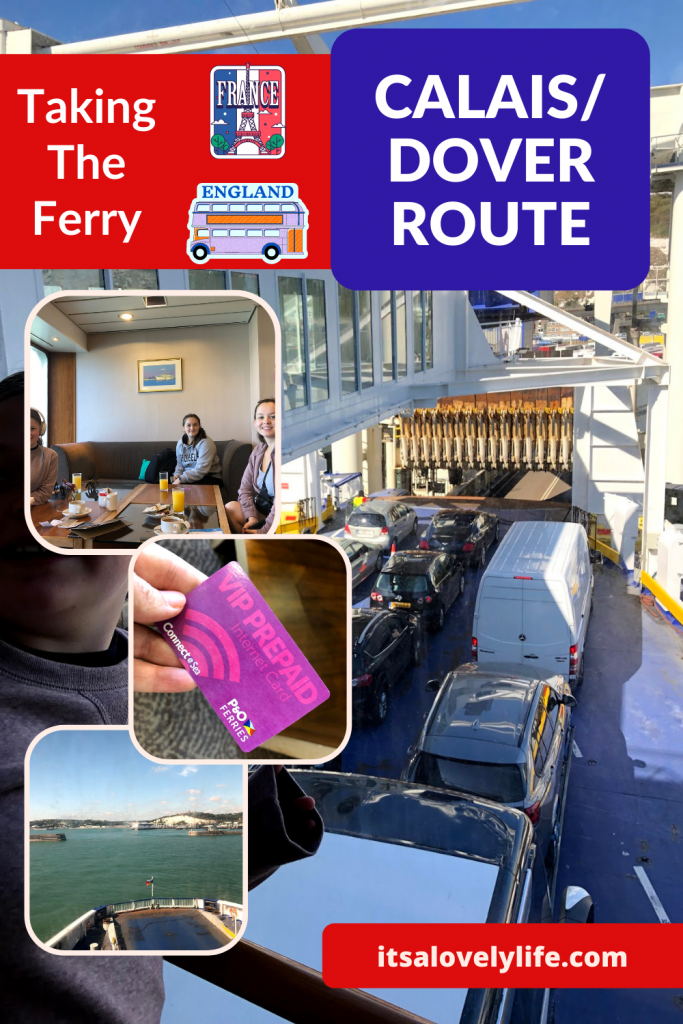