As we approach the 5 year anniversary of one of the worst disasters our city has ever experienced, we want to take time to offer reflections on Hurricane Harvey. Houston Moms does this best by sharing our stories, and offering hope and encouragement to moms who may have experienced or are experiencing similar memories and emotions. 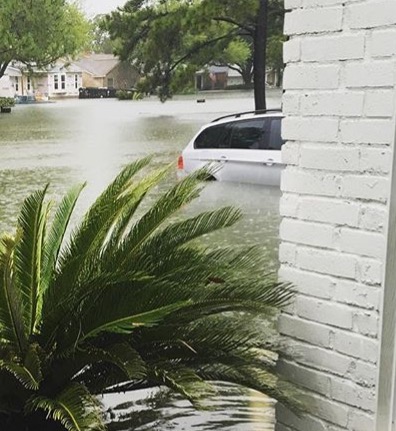 In August of 2017, my husband Will and I celebrated our two year wedding anniversary with a trip to Montreal. It was the first time I had ever been, and we spent the whole week galavanting around the French-Canadian city; food tours, hikes, site-seeing, etc.

The evening before I was scheduled to head home while he stayed behind for work, I got a phone call from our dog sitter. It was around 1:00 am, and I can still hear her voice, cheerful and apologetic, the edges crackling with fear:

Your house is flooding.

We were vaguely aware of the situation that was taking place back home while we were away. We had been paying attention to the news and watching as Hurricane Harvey descended on our city. But being young and new to Houston, we had never experienced this kind of natural disaster before and the idea of ​​going home early to board up our house and evacuate our pets didn’t ever seriously occur to us.

The next several days would be consumed with fear and panic, but by far the most terrifying moment of the entire ordeal was a few minutes into my phone call with our dog sitter. As Will and I tried to think of what to do and how to keep our dogs and our sitter safe at our house (I explained in detail where to find an ax and how to get to the roof of our house if necessary) if the water had reached the height of the electrical outlets and as soon as she told me it was getting close but not there yet, the phone cut out.

I feel nauseous thinking about what was probably only several seconds but felt like an eternity until she called back to inform us that her phone had cut out and was nearly out of battery. Taking a deep breath, I sent a quick message letting the owner of our rental house know that I would not have time to clean up before we raced off to the airport.

The earliest flight wasn’t until 7:00 am but we were there at 5. There were no flights directly to Houston, but we were both somehow able to book connecting flights on the east coast that promised to get us close enough to be picked up by our moms. Like a movie we were sprinting through airports, apologizing hastily as we knocked over rolling suitcases and tearfully begging travelers in front of us to let us cut to the front of the security line.

The next several hours were a blur of pacing the hallways of Dulles International and pleading with flight attendants to book me on a flight to Austin that was probably going to get canceled. Having nothing else that I could possibly do, I accepted my voucher and made my way to the closest Sheraton to try and get some sleep before my flight the next morning.

I cried in the bathtub for a while before getting another phone call from the dog sitter. She was able to be rescued via boat from our house, but they were only taking people; no pets. I furiously made my way to social media to do the only thing I could do at that point – beg for help. 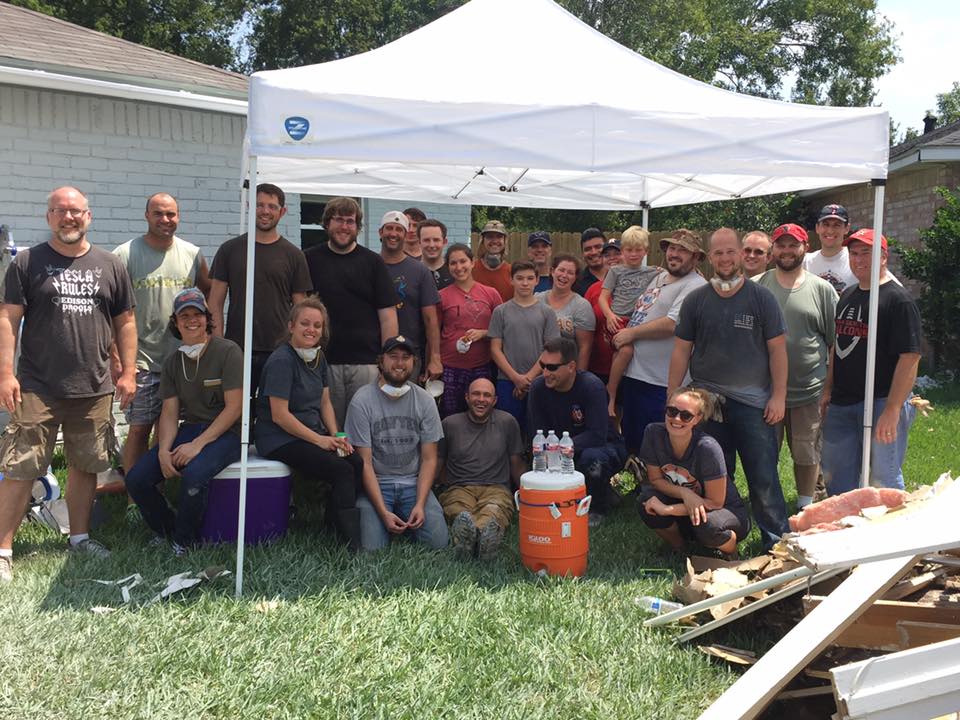 Over the next few hours I saw the first glimpses of what humanity and the city of Houston are truly made of. Dozens of friends, colleagues, and people we didn’t even know came out of the woodwork to offer what they could. Several people tried to take large trucks by our house to rescue our dogs, who were now in the attic with food and water and little else, but to no avail. The water levels were too high. It was too unsafe.

Meanwhile, as I eventually passed out from exhaustion for a few hours, Will made it home on the one flight into San Antonio and was picked up from the airport by his mom. She drove him back to Fredericksburg where they loaded up her truck with little else but an inflatable raft and a prayer and he headed to Houston.

It took hours, multiple detours and a quick nap at Buc-ees before he made it close enough to our house that he could float in and rescue our dogs.

While the water levels still made it impossible to drive in to our neighborhood, most of the water had drained out of our actual house and with a bag of Doritos that our dog sitter had left behind he coaxed our two 70 pounds dogs down the pull out stairs from our attic and into the raft.

As all this was happening I miraculously made it into Austin where my family picked me up and Will and I made it back to his mom’s house in Fredericksburg at around the same time that evening. In less than 48 hours our lives had completely changed forever, but our dogs were safe and we were all back together.

We stayed in Fredericksburg for several days until we just couldn’t stand it anymore and had to get home. Will had so quickly gotten in and out of there that he hadn’t had time or bothered to assess the situation.

Unfortunately when we turned down Scarsdale, just outside of Beltway 8, it was quickly clear that we were not going to make it into our neighborhood. We were lucky enough to have friends in EaDo whose home had been unaffected by the storm, and we were able to stay with them for several days. 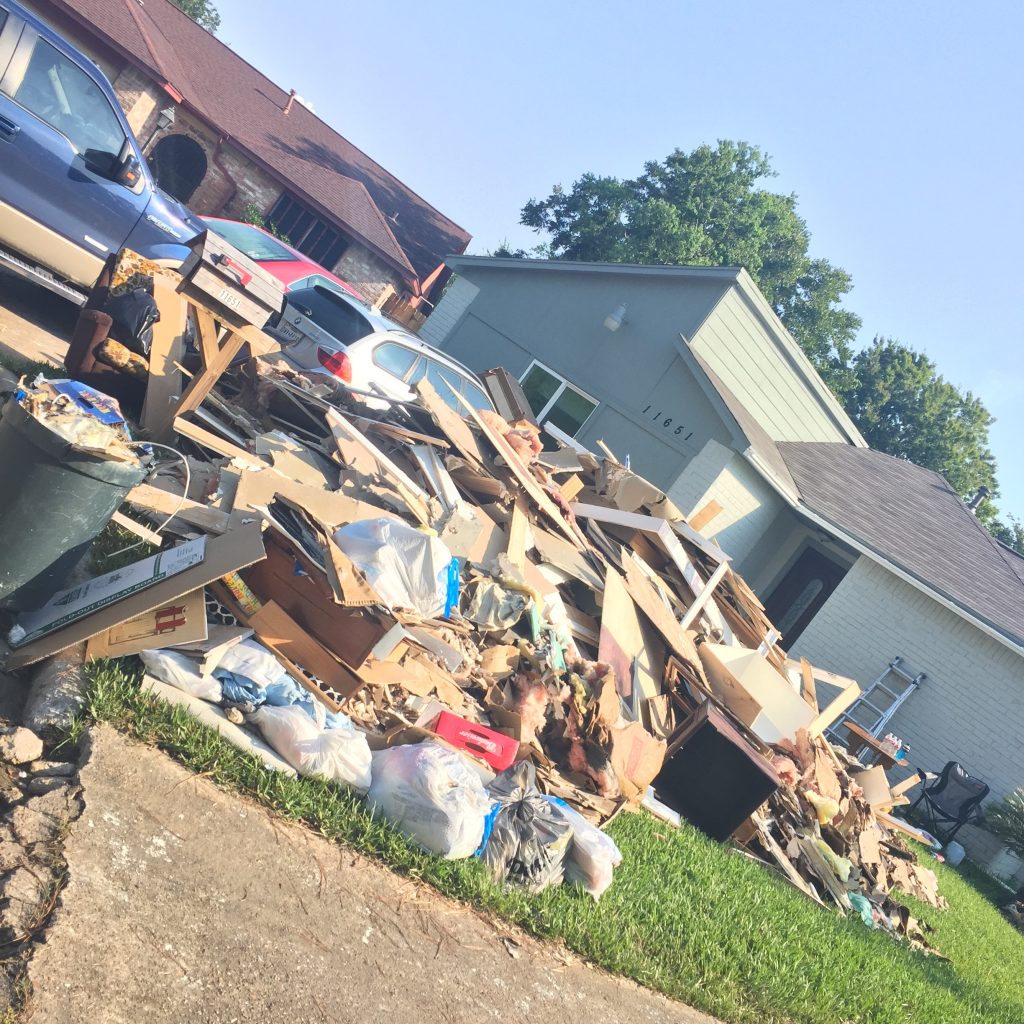 By the time we were able to get back into our home, which we had just purchased as first-time homeowners the previous April, it had been nearly a week since Harvey and on the advice of many people older and wiser than us, we knew we had to assess the damage swiftly.

At the time, the company in Houston that Will worked for had created a Facebook page for anyone needing assistance to sign up for help. The next day we had a crew of nearly 40 tearing out our walls, floor to ceiling. They brought us dehumidifiers, fans and pizza and by the end of one day we were on the mend. Will had worked at this company for less than two years and they descended upon us like we were family.

It would be almost a full year before our house was back in a livable condition, but after everything was said and done we just never quite felt comfortable or settled in that house and ended up moving just a few years later.

I was never a person who felt comfortable asking for help before this, and am often reminded of the quote Brene Brown’s book Rising Strong when I think about this time:

The courage and compassion that our community in Houston showed us in our time of need changed me forever. I can’t pretend that it’s something I no longer struggle with, but learning to ask for help has made me stronger, and solidified Houston as not just the place that we live, but our home.

Disclaimer: We are a participant in the Amazon Services LLC Associates and other Affiliate Programs designed to provide a means for us to earn fees by linking to Amazon.com, Target.com, Nordstrom, ABC Mouse, and other affiliate sites.