I think one thing nearly all women can agree on is bra shopping is THE WORST. While brands have begun including more inclusive sizing in their bras, they certainly aren’t all built the same. We’re all different. Our boobs, backs, shoulders, all have different needs. Maybe feminists of the 1960s should have actually burned their bras (massive bra-burning during the feminist movement didn’t really happen like we’re lead to believe). 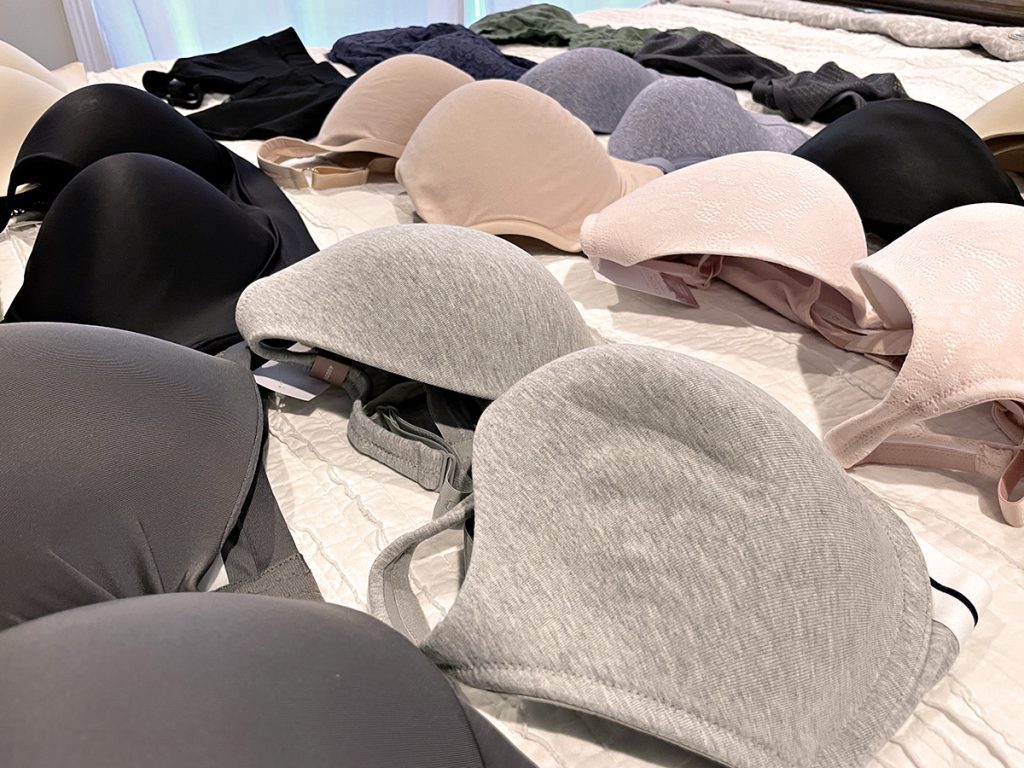 In third grade, my mom and I were on our way to field day. This was back when field day was about winning the competition you’d practiced over the last six weeks in gym. There were the running kids {I was not that kid} and the 3 legged race kids {I was that kid}. We competed against other schools and you won ribbons and bragging rights for an entire year.

We left early in the morning, and mom pulled into the Sears parking lot. “We need to pick something up real quick.” We bought my first sports bra. It was white, and basic, and foreign, and I truly wasn’t sure why I was wearing it.

This whole situation is burned into my core memories. Maybe it was because this brand new {uncomfortable} thing I’d be wearing for the rest of my life was stacked on top of a day that I was already feeling the nerves and the pressure to do really well in that three legged race with my best friend who was easily 5 inches taller than me. 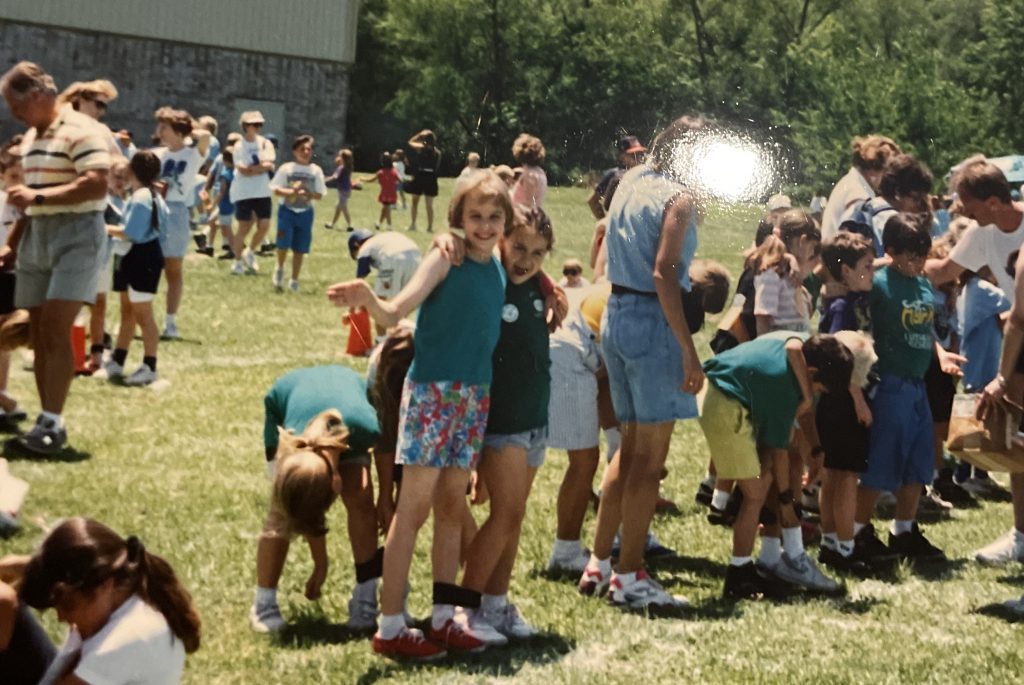 Bra shopping didn’t get easier for me as I got older. I was a C cup by 6th grade, a D by 8th. In junior high my boobs were a thing I just needed to keep contained when I was running the bases in softball.

Through junior high and high school I was regularly hit on by much older men at concerts, in the grocery store, at church. This was always attributed to the size of my chest. People would say, “it’s because you’re an early bloomer” and I’d always feel as if I’d inadvertently done something wrong, and out of order. It was never the older man’s fault. It was always the fault of my boobs.

As a freshman in college I had to go dreaded bra shopping as my boobs had again, got larger. It was the early 2000s and everyone was buying bras at Victoria’s Secret, I walked in and a girl, younger than myself, measured me.

I just stared at her. The tone of her voice made me feel SO other. I also, truly, didn’t know where else to buy a bra.

She was so rude. My boobs were clearly putting her out. I was not wanted here at Victoria’s Secret. Maybe that was her secret, my DDD sized boobs did not belong.

She brought me the one bra from a drawer towards the back, in a dark corner of the store. It was nude, full coverage, not something a college freshman wanted to wear. I tried it on and hated it.

I came out of the dressing room.

Still sounding incredibly put out by my mere existence, “So, did it work?”

“What do you mean you don’t know? Did you do the spillover test?!” She was getting even more irritated by my boobs.

Shamefully I responded, “Um, I don’t know what that is.”

She looked at me with utter disgust. “Really?! Your mom didn’t teach you that?” She sighed again as if I was certainly the worst thing that had ever happened to her.

I wanted to yell in her face, “NO LADY! WE RAN INTO SEARS BEFORE FIELD DAY IN THIRD GRADE.”

Instead, I just handed her the ugly bra and walked out feeling demeaned and defeated by my own boobs.

Let’s Do It Differently 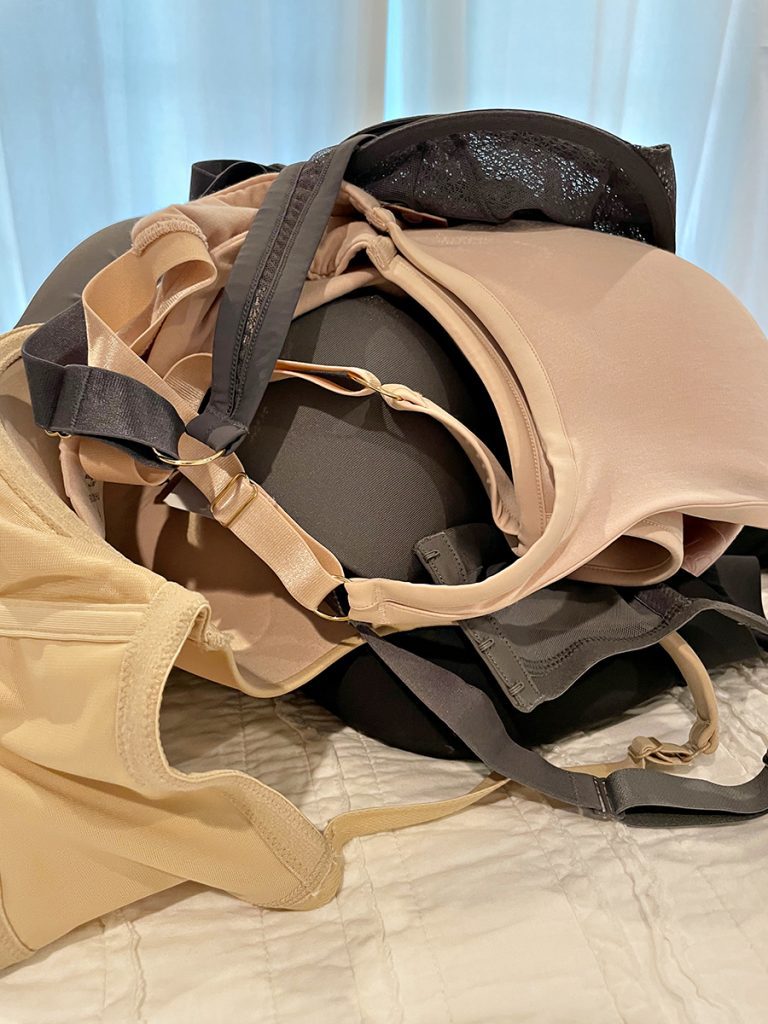 But it’s now 2022, and one by one my bra soldiers were laying down arms, wires were popping, seams were ripping. I had avoided bra shopping for years. Last month I was down to one, last, uncomfortable bra. I found myself in the same place I was as a freshman in college, I didn’t know where to go to buy a bra. Luckily social media is a thing now so I took to my Instagram Stories and asked for bra recommendations. They came flooding in, along with requests to share my findings.

Ladies, we’re all in the same breast-filled boat. We all hate bra shopping. We’re all on the hunt for the perfect bra, and none of us has the energy to find it. I received recommendations for 10 different retailers. I chose the top 5 and, late at night in the dark, from my bed, my cell phone glowing on my disgruntled face, I ordered 15 different bras. When they all arrived, I turned the A/C down to 70, closed my bedroom door, and laid them all out on my bed. I stared at an army of braziers, lined up and ready to take me down. I took a deep breath and took one (or 15) for the team.

I ordered bras from: Aerie, Soma, Third Love, Pact, and Cacique. Surprisingly I ended up keeping at least one bra from four of the above retailers. Trying them all on in my own home was 100 times more comfortable than doing this in a store with a judgy attendant waiting. 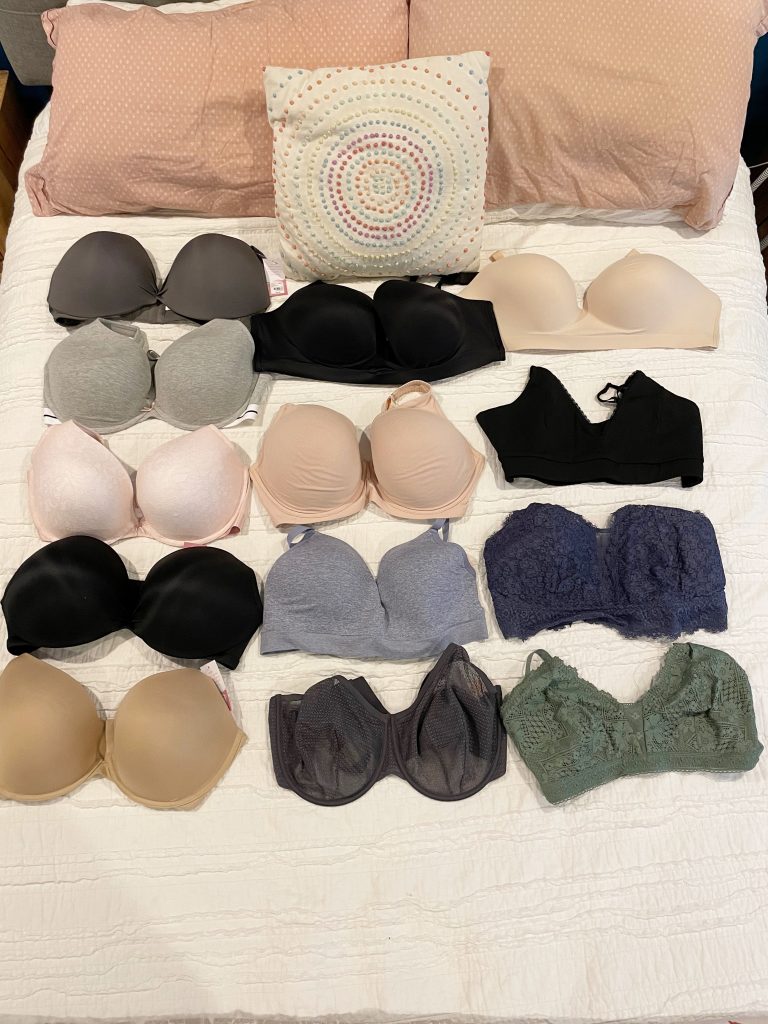 Aerie: I own one of their bathing suits, which I love, but I was certain this was a brand that did not make bras for me. I ended up ordering two bralettes, a new style for me. Surprisingly, of all the bras I tried, these were some of my favorites. If you haven’t tried a bralette, go for it. It’s like the love child of a pretty lacy bra and the most comfortable sports bra ever. Bonus, Aerie’s prices are really reasonable.

Soma: This was by far the most recommended bra brand among my followers. I ended up keeping one. They are soft as can be, but feel very over engineered for me. Lots of odd padding pockets and flaps. I’m in my mid 30s, I’m a mom and business owner, I’m in a time in my life where I need my bras to be simple.

Cacique: This brand has been my go-to for years. It’s the place a dear friend took me in college after my horrible experience at Victoria’s Secret. I kept two bras from them, one a classic t-shirt bra, the other a push up bra for special occasions.

Third Love: One style I tried was a hard no from me. I’m pretty sure it was a torture device in a past life. The one I kept was actually a wireless bra. I was totally shocked that it gave me the support I needed without being a straight up sports bra style. Truthfully I would never have tried this style in a store.

Pact: Pact is my go-to for underwear and socks {seriously, they’re amazing}. They’re organic cotton and comfy and they’re a company focused on sustainability. They’re newer to the bra game and I tried one style. Unfortunately this one ended up getting sent back, it was just not right for me.

Changing the Experience, For Our Daughters & Ourselves 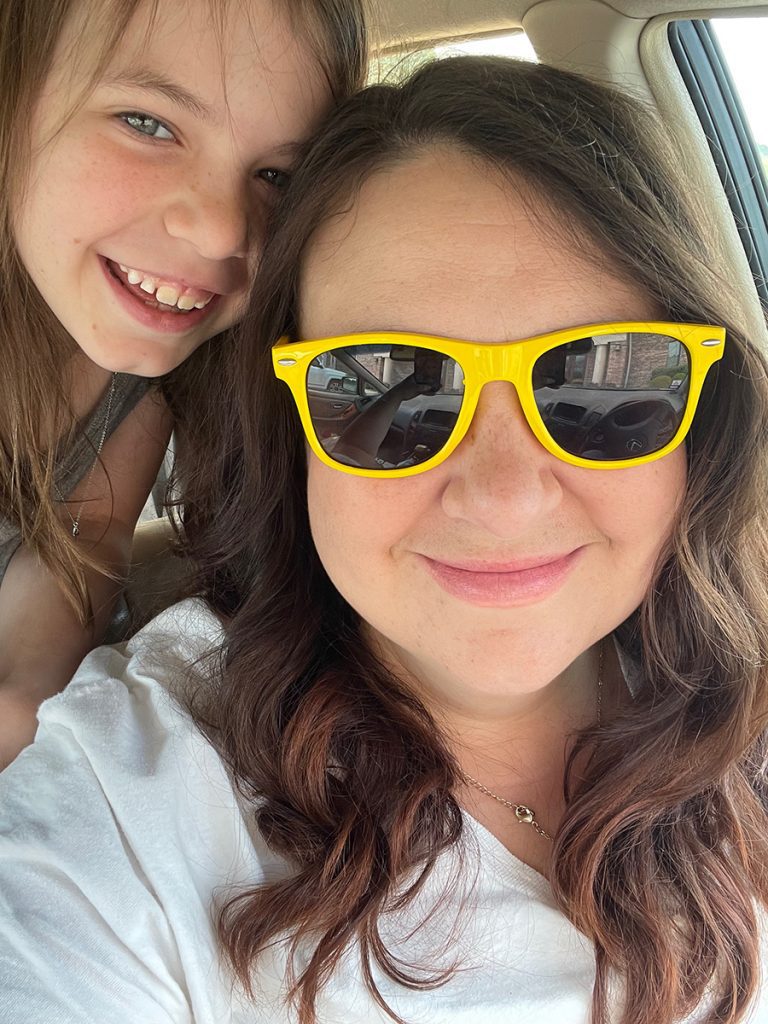 My daughter is in third grade. Some of her friends are already wearing bras. I know it’s coming. I already have a bra on hand for her. She keeps it in her drawer, she’s tried it on. For now, she has the option of wearing it. She has time to get used to it. We’ve had several conversations about boobs and it’s something we’re fully open about in our house.

I’m excited for her that we live in a time where there’s more inclusivity for all kinds of bodies, where we can talk about changes in our bodies more openly and realistically. I love that she has the option of trying bras on in the comfort and acceptance of our own home, that her experiences will be different than mine.

So ladies, your boobs are your boobs. They are perfectly your’s. Your body, your boobs, are not wrong. They will change with age, and kids, and time and experiences, and isn’t it amazing that these bodies we get to occupy have the ability to stretch and grow and change with us?

Every stretch mark on my boobs is a reminder of how I changed so quickly and how I’ve overcome the shame I felt back then. Or they’re a reminder of how my body was able to magically feed my child for the first year of her life.

Our boobs, our bodies, are incredible. Remember, clothes and bras are here to fit our bodies, not the other way around.