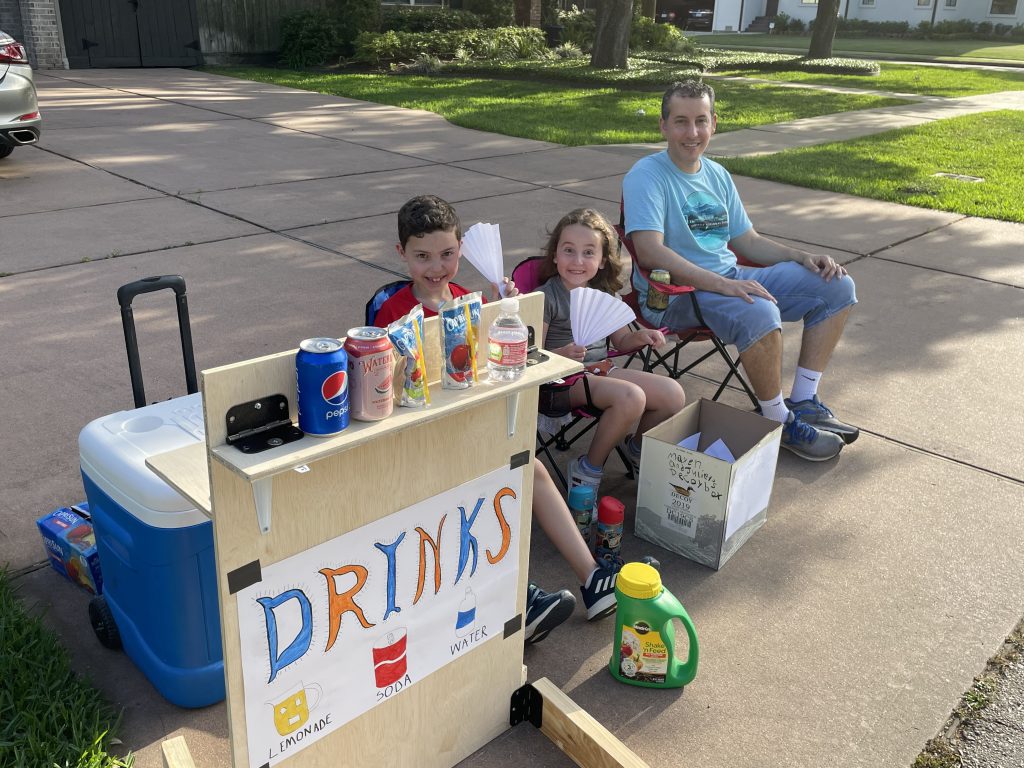 In honor of Father’s Day, I asked my husband to share his experience of a unique project he underwent with our kids in an effort to lure them away from screens, and to show them how to earn some extra spending money. I am so proud of him and this project, which took months of planning, and it has been humbling to see it come to fruition. I’ve always known what a wonderful father he is, but this right here is a prime example. It’s also an easy idea for other dads {or moms} to replicate and do with their kids. Happy Father’s Day to all you incredible dads out here.

An Idea is Born

This past winter break, the kids and I had two weeks off. We recently moved back from France, and we were getting settled into our new house. Each weekend leading up to the break, the kids saw me fixing things around the house and doing all sorts of projects to “make it our own.”

During the break, the kids and I brainstormed different projects we could do together. My son is no doubt headed for a successful career as a CEO of a top engineering company, and my daughter is a burgeoning artist. My son expressed a desire to make money and build something, and my daughter wanted to create something and drink something “yummy.” I wanted us to be together, and learn something in the process…let’s just say I had enough of watching Frozen and Big Hero 6.

We settled on making a drink stand. Think: lemonade stand, but offering more than just lemonade. We wanted to make something unique, so we decided to not look at instructions or previous models to make our own. We started with a piece of paper and an open mind. We drew a few design models with the sole requirement that the drink stand needed to be compact and collapsible {and of course, fun!}.

Once we settled on a prototype, it was time to head to Home Depot to buy the raw parts to build our project. We went to the lumber department so that the kids could see the different types of wood available, and to learn how to specify exact cutting for the employee in that department. We learned how loud the saw can be and how exact it can cut. Fun times. After getting the wood, we went to find hardware {door hinges, shelf holders, and fasteners} so we could ensure stability, build shelves to display our drink options, and hold our cash box behind the stand. $75 later, we were on our way home to start construction.

Our first step of construction was to saw the 2×4 wood blocks in half since Home Depot could not offer that service free of charge. Then, we attached door hinges to the 2x4s and our stand plywood so the “feet” in front and back could collapse. Next, we screwed in the shelf holders and attached door hinges to the cut plywood to make our shelves. Last, and apparently the most fun of all the steps, the kids learned to use sandpaper so that our drink stand would be smooth and not cause splinters. 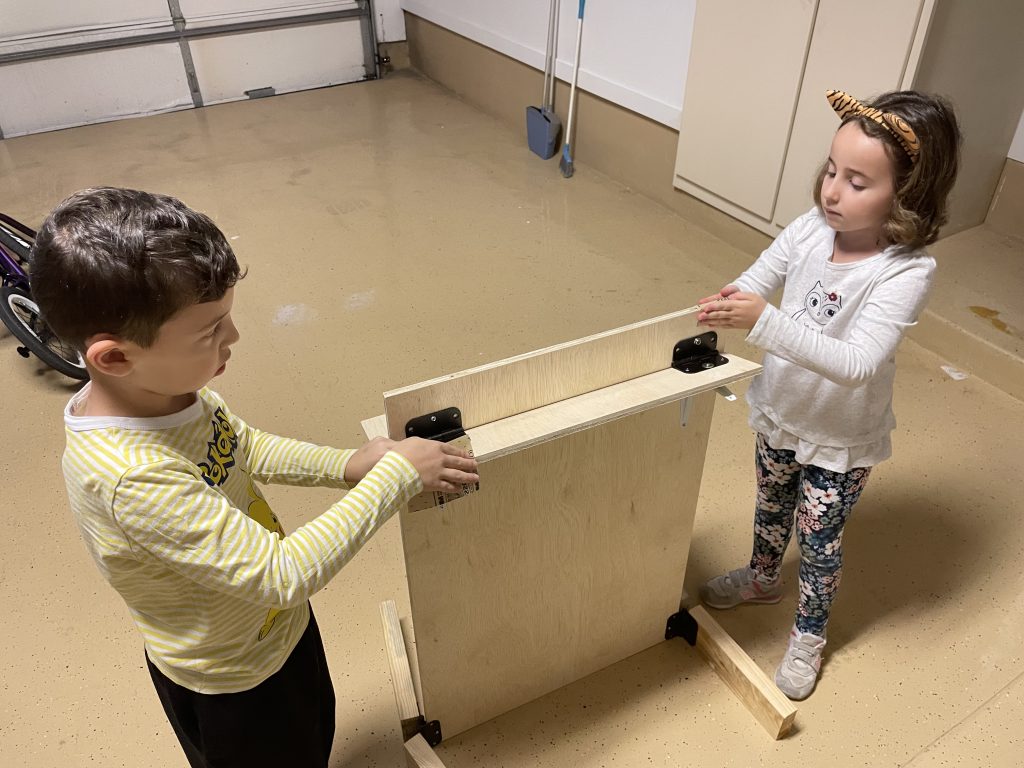 Once the stand was built, we needed to test that it would stay up, so we applied pressure from multiple directions. Nobody wanted to lose drinks or see them spill due to poor construction. All systems were a go, except for the need to make it more aesthetically pleasing.

We made a design on paper, and then copied it on a larger scale to a poster board. We used pencil to create our own font, and added the color with markers. We drew a lemonade pitcher, a water bottle, and a soda can. 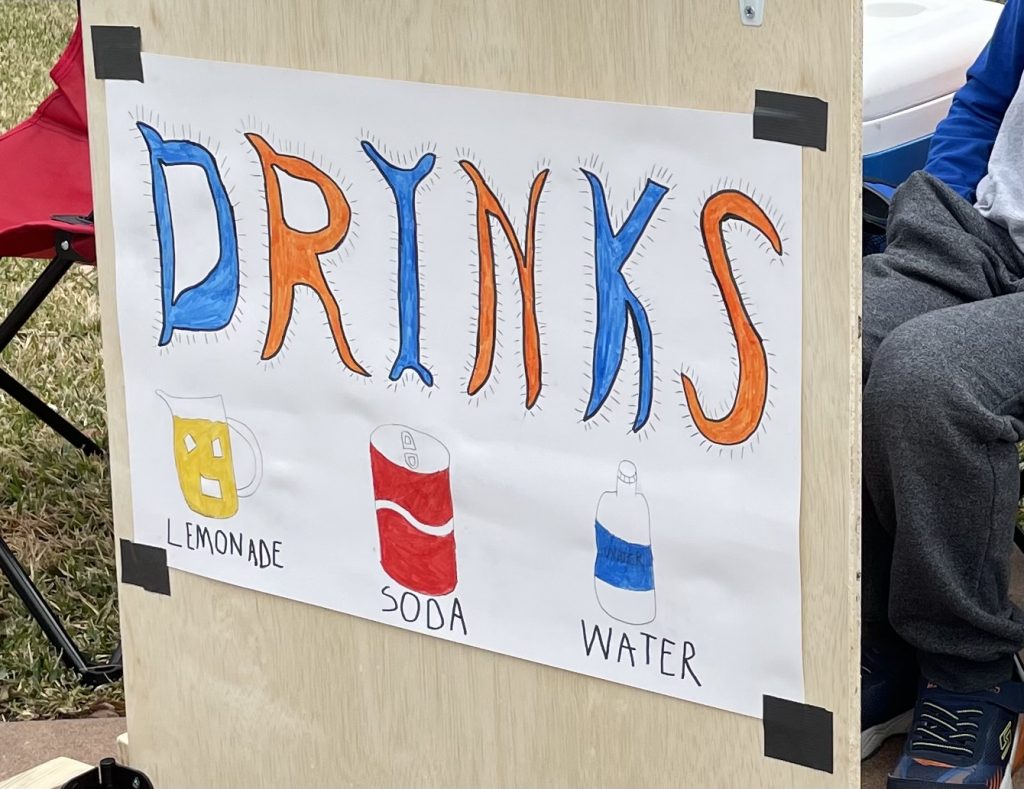 Finally, we were all set. But what about the drinks? Sams Club was our answer. We had choices to make on what drinks we wanted to serve, and we wanted to pay the lowest prices. Why? I wanted to teach the kids what it meant to “break even” on their business venture. So, we bought a big tub of lemonade powder mix {we chose the pink one}, we got a 36-can Pepsi pack, and a package of 48 water bottles, all for a total of $25. That put our total expenses at $100.

The kids knew their target profit margin, so now it was time to price our products. We decided to make things easy: $1 per drink. We waited for warmer weather in the Spring to open up for business.

We made our lemonade, put our Pepsi and water bottles on ice in our cooler, set up our stand and chairs, and sat at the end of our driveway to wait for our first customers. After a few minutes, we saw people walking their dogs on our street and it was time to attract customers. We got my daughter to vociferously announce: “cold drinks,” but she was too shy, so I took the lead and made eye contact and said hello to anyone who walked by.

Our first customer was walking his dog and asked for lemonade. We poured him a cup, he gave my son $1 and we were on our way. Ten slow minutes later, someone walked by and told us they didn’t have any money. Then, five minutes later, a guy drove his car passed us and then reversed back and bought two Pepsis.

Sales were slow so I told the kids to get some books to read in between customers. Suddenly, their Savta (grandma) drove up and decided to buy ALL the lemonade and four Pepsis for her guests that come to the house every Wednesday to play mahjong. Savta for the win! Our total rose to $13 in one hour of time. The last surprise occurred when we met an older gentleman who was walking his dog very slowly. He didn’t want any drinks, but he gave the kids $5 and requested that it be “paid forward” to the next people that passed by without money. What a generous gesture! We waited another 20 minutes, but we had no more customers for the day. Our grand total for opening day was $18. Only $82 to go to break even.

The kids discussed and decided they needed to add more options to the products being offered, so they started making paper fans. My son folded the papers and my daughter added her artistic flair.

When we set up for our second day of sales {two weeks later}, we now had cold drinks and paper fans. My daughter also gained a little more confidence and decided to make the announcements to passersby. Anytime she saw someone, she started yelling “cold drinks, homemade cold drinks, and get your paper fans!”

Interacting with the Neighbors

One lady stopped by and bought some lemonade. She asked the kids why they were selling drinks. The kids were shy, so I chimed in and said that it was a learning experience for them to build something with their own hands, handle money and do math when giving change, and save money for the things they really want, such as video games . Later, our neighbors returned home and came over with their kids to buy some water and lemonade. Their dad started reminiscing about when he was a kid and had his own lemonade stand. He told us that back then, lemonade was 25 cents per cup, but he also did it to save money for video games. The kids all smiled.

More people began walking by our stand, but many didn’t have money and said they would come back after dropping off their dog. Few did, and those that did were very nice and friendly, making conversation. This was an added benefit – meeting our neighbors and practicing social skills. In this day and age where kids are glued to screens, they have somewhat lost the “human touch.” This drink stand was a great opportunity to become more connected to our community.

So Many Lessons Learned

All in all, the drink stand project was a great way to connect with my kids. They learned how to use many tools around the house. They practiced their math when giving customers change and calculated how much more money they needed to break even. They worked together to create something and learned how to make decisions, collaborate and delegate roles. They gained skills in responsibility and accountability. They learned what it means to “pay it forward,” thanks to that generous man’s example. They grasped the concept of money and value, and understood the notion that it takes hard work to get the things that they really want in life. There was also the added bonus of polishing their social skills by communicating with real people. They are beginning to get the hang of the art of sales.

I’m glad that we did this together, and that my kids learned a lot in the process. We now have another way to spend quality time together, and it’s so exciting for me to see their motivation when we decide to bring out the drink stand. When we open for business, we are all united as a team, with razor focus to sell drinks {oh, and paper fans}.

No comments to show.
We use cookies to ensure that we give you the best experience on our website. If you continue to use this site we will assume that you are happy with it.Ok